At 18 years old he moved to London where, among many other jobs, he worked as a sommelier at the National Portrait Gallery. “Why? Because I am from La Rioja and La Rioja had a good reputation in England at that time. I showed them my ID when they asked. I also told them my family had wine.” Later, he returned to Spain to study photography and after spending some time in Huesca, he settled in Barcelona. In Barcelona he combined his studies with his job at Federal Café until he decided to open a small corner of quality coffee just over three years ago. “When I started Satan’s I asked the coffee roasters for a light roast and they were so uncomfortable they didn’t want to do it.” Satan’s personality evokes the image of the bad boy who doesn’t accept the norm.” That bad boy is Marcos Bartolomé, the soul of Satan’s Coffee Corner. We talked to Marcos about a project that broke the mold in Barcelona and that started a movement that is getting stronger in the city.

Marcos, how did you get to Barcelona and decided to open a coffee corner?

My great great grandfather had a coffee company that currently my uncles manage. It has nothing to do with what I do, but coffee has always been in my life. I came to Barcelona to study photography and I immediately started working at Federal Cafe. At that time they had high quality standards and that allowed me to learn new techniques. Later, I borrowed some money to start my first coffee corner. I was working afternoons and nights as the manager at Federal, mornings at Satan’s, and at the same time, I was helping others to open their coffee shops, such as Caravelle. I have not had a day off for the last 3 or 4 years!

How did your experience at Federal influence Satan’s Coffee Corner?

Crick and Tommy, the original owners at Federal, have been my mentors. I learned a lot from them. They taught me to appreciate quality. Not specifically quality in coffee but in absolutely everything. They were perfectionists. I understood the importance and attractiveness of functionality. It was very easy working there. I spent a lot of time talking to them and observing all those details. I adopted that work ethic to my concept.

“I want to know absolutely everything about beer, wine and make sure that everything we serve here is special.”

How was the idea of starting Satan’s born?

The idea was born in Copenhagen. I spent some months there in 2012 and I could see on a smaller scale what Federal was doing. The coffee was very good at any small coffee shop in the city. I got to know Coffee Collective and the Nordic influence. It was a triangle of information between what I was familiar with, what I was seeing in Copenhagen and what I was getting from the world in general. At that point, I decided that if a coffee shop worked with four tables, why couldn’t it work without any tables and simply serve directly to the street?

What’s is the concept of Satan’s?

We are a specialty coffee shop and I do appreciate coffee a lot since it is what gave us the potential. However, I want to know absolutely everything about beer, wine and make sure that everything we serve here is special. We don’t sell anything we haven’t tried or that we are not sure about. And absolutely, we don´t do anything that doesn’t amuse us. Satan’s concept is simply about raising the quality in Barcelona and trying to get people to start paying responsibly. 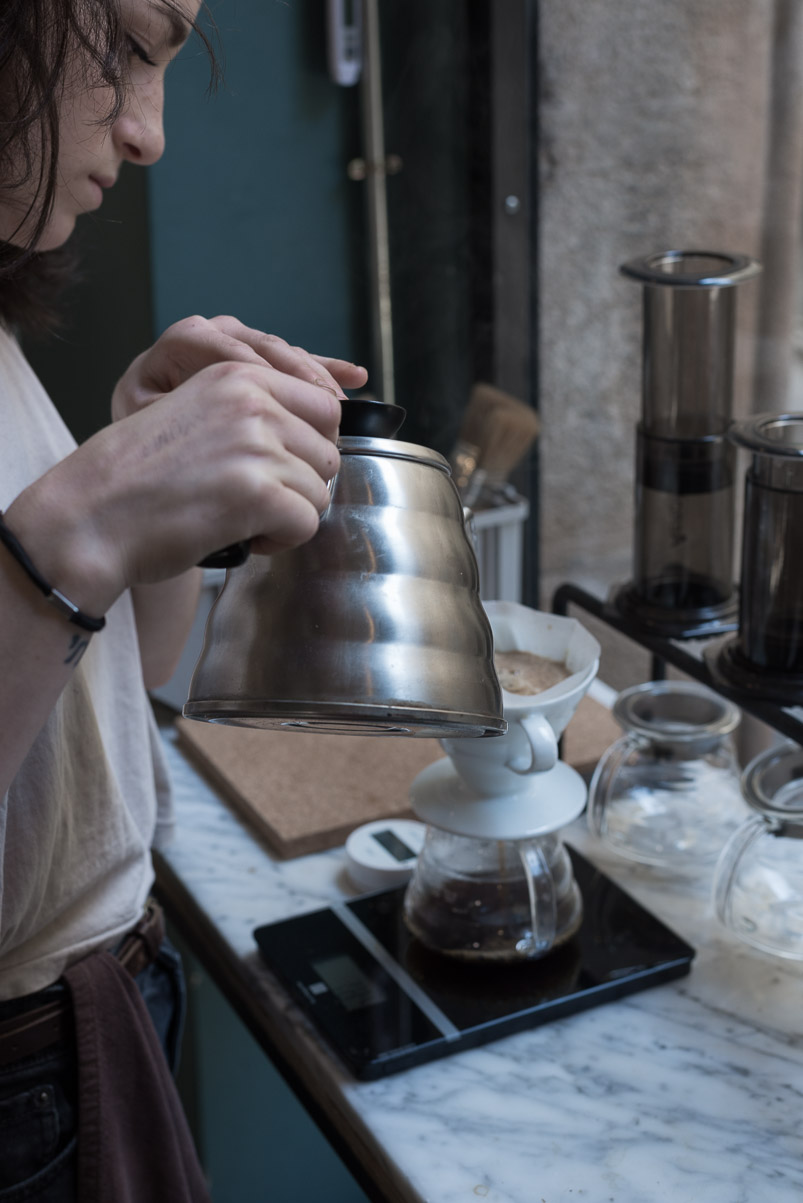 What do you mean by ‘start paying responsibly’?

You can’t go to Apolo and pay 6€ for a commercial beer or 12€ for a drink and then come to my coffee shop and complain because the latte cost you 2,20€. It is as simple as that. The coffee that we serve has been picked up by hand in its origin, they have processed it, and it has been brought here. Then, Joaquin has roasted it and I have prepared it for you. All those hours and work for 2,20€! I know things are tough now here in Spain but we need to spend money wisely and consciously. Our deep belief we are striving for is to build a culture on the client’s side, which means that the client starts demanding from us and not the other way around. 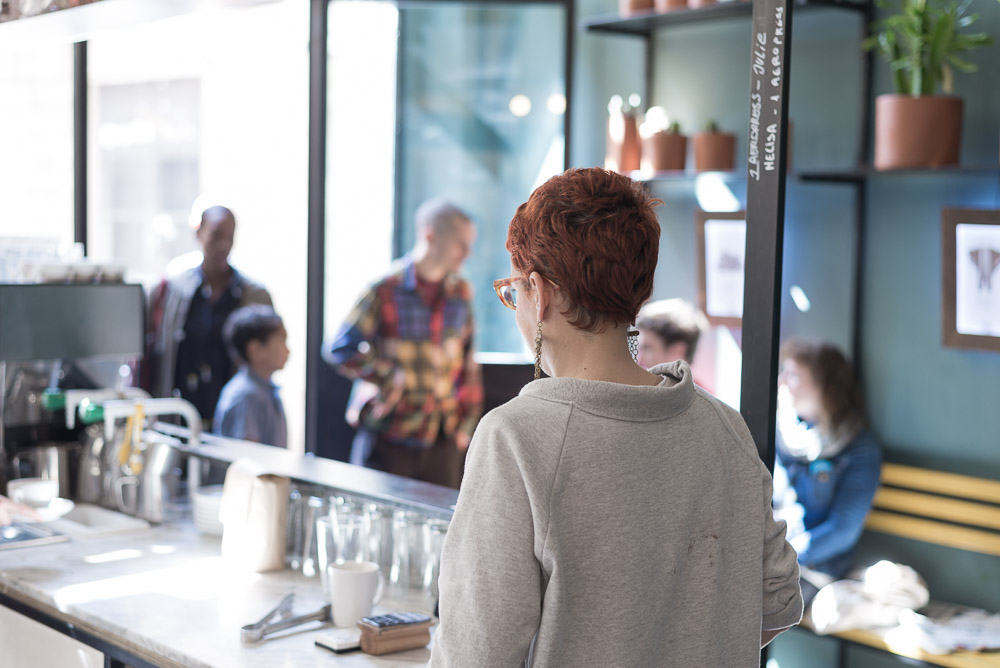 How was the transition from having the corner to having your own space?

The change has been great. Sometimes I miss my life at my small and quiet corner. I also miss Raval. Raval is free and multicultural while the Gothic neighborhood is a great Indian cemetery. However, having this space has given us much more impact. I went to New York and Paris to work. Now I don’t just make coffee. I do other things, which is nice. When I started this venture three years ago, I made 5-year projections that we have already achieved. Everything happened very fast. 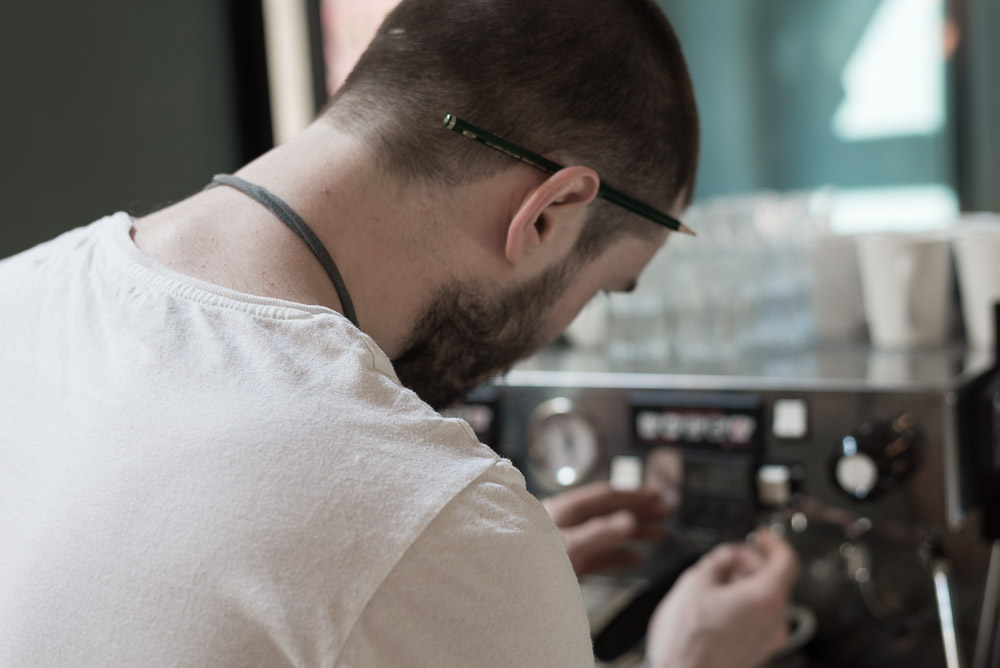 “I wouldn’t imagine Satan’s without Right Side Coffee.” 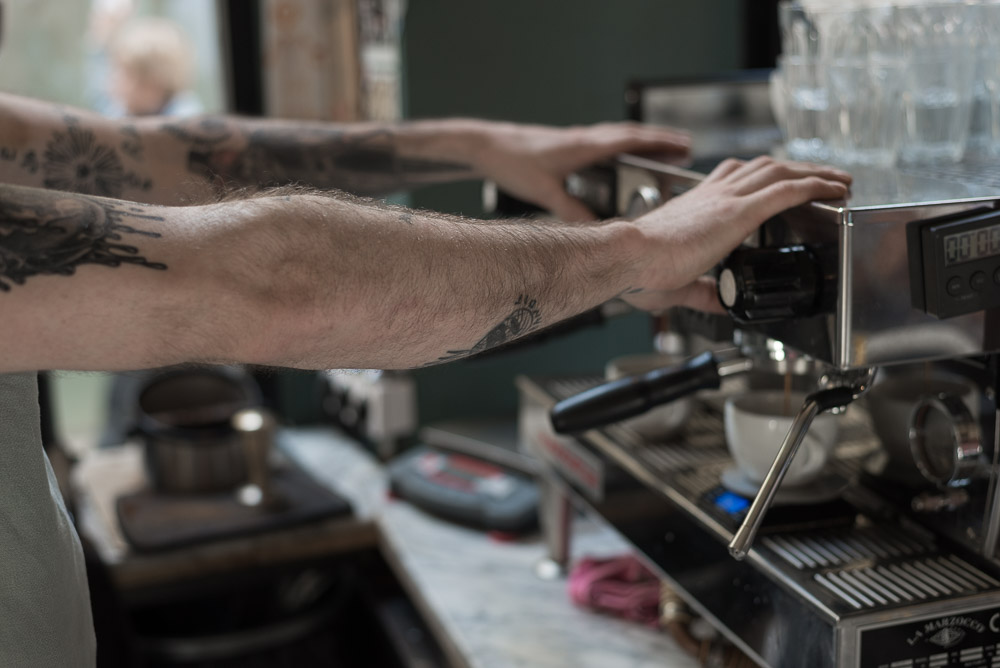 Your coffee shop is beautiful. What inspired you to design the space?

Not keeping secrets is part of Satan’s philosophy. At the same time, getting rid of all the elitism that is around coffee nowadays was part of the idea. The only way to do it was exposing ourselves. That’s why there is no bar; we want people to participate in the space. The machine interior is exposed, we have an open kitchen, the bathroom has a window and actually the whole space is a big window. Everything is open. On the other hand, we negotiated with the City Council and our neighbors for about a year. Part of the creativity process was building a different coffee shop than the conventional pattern that the City Council was proposing based on their requirements. It was a challenge and I learned a lot. 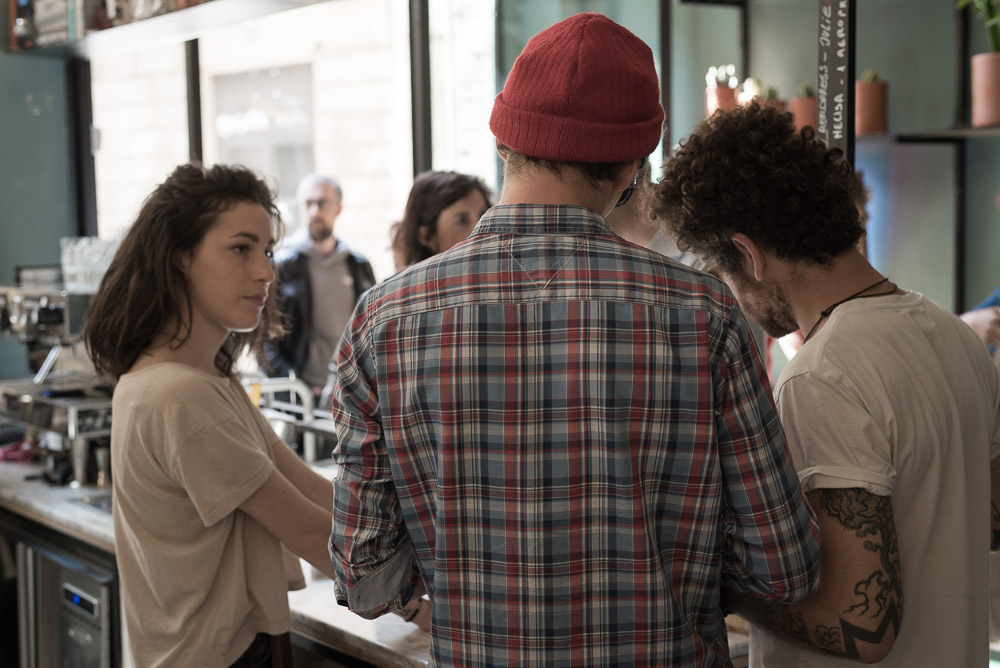 What’s your role at Satan’s?

In Satan’s we are a team: Nelly, Ken, Adriano, Miquel, and Joaquin, of course. I wouldn’t imagine Satan’s without Right Side Coffee. I am a barista, but at the same time I am a restaurateur and entrepreneur. Currently my role is ensuring everything happens. Let’s say I am like the conductor of the orchestra. I have taken this entire journey to know all the parts and necessities that ultimately make a restaurant. I am passionate about work efficiency, in the spaces and services.

I love opening and closing the coffee shop. Those little peaceful moments are my treat. I have created this space that people enjoy 12 hours a day and I also deserve enjoying it. In the mornings, I try coffees, cup them, sit at the bench and observe everything. In the afternoons, after those 12 hours of white noise, when everything stops, I sit and look around and see everything organized. About 200 people come here everyday. If all these people came to your apartment they would probably destroy it. The beauty of this is that at the end of the day everything remains the same. 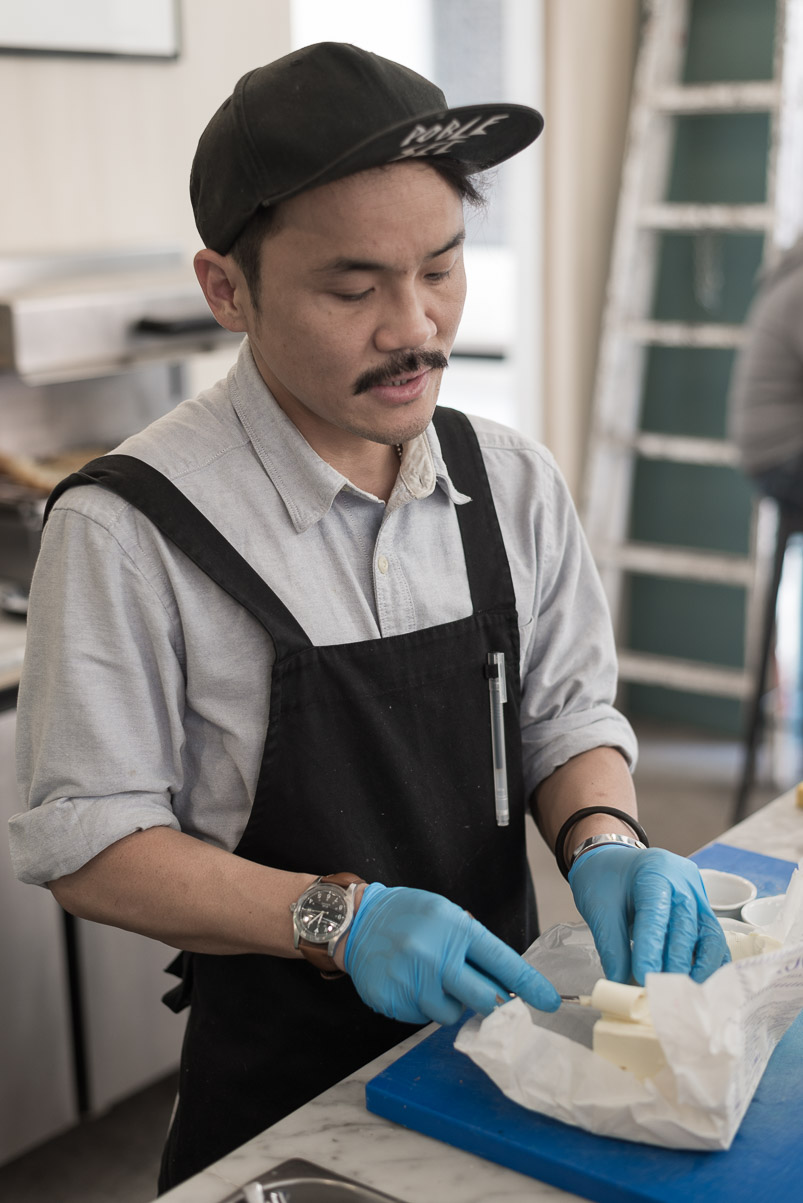 What’s the most rewarding aspect of having created Satan’s?

I am very gratified by my clients. We have been working for the last 3 years for them. Everything we’ve done was for the clients and for changing the gastronomic culture in the city. They are the ones who are giving us feedback everyday. That’s my biggest satisfaction. Our clients go to the other side of the world and remember us. They bring us souvenirs like coffee or whisky. I love it! 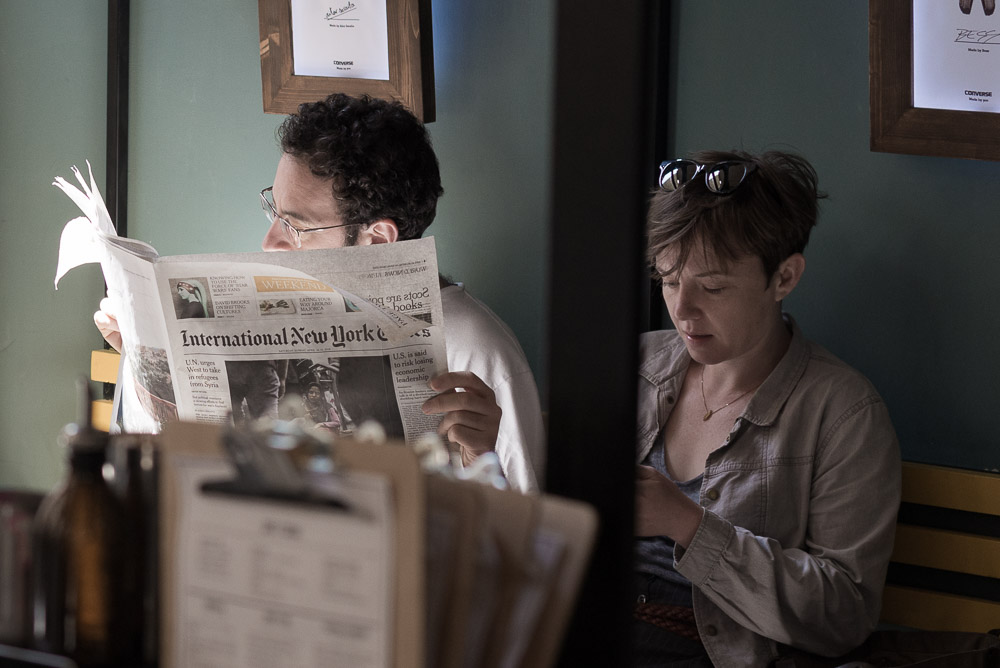 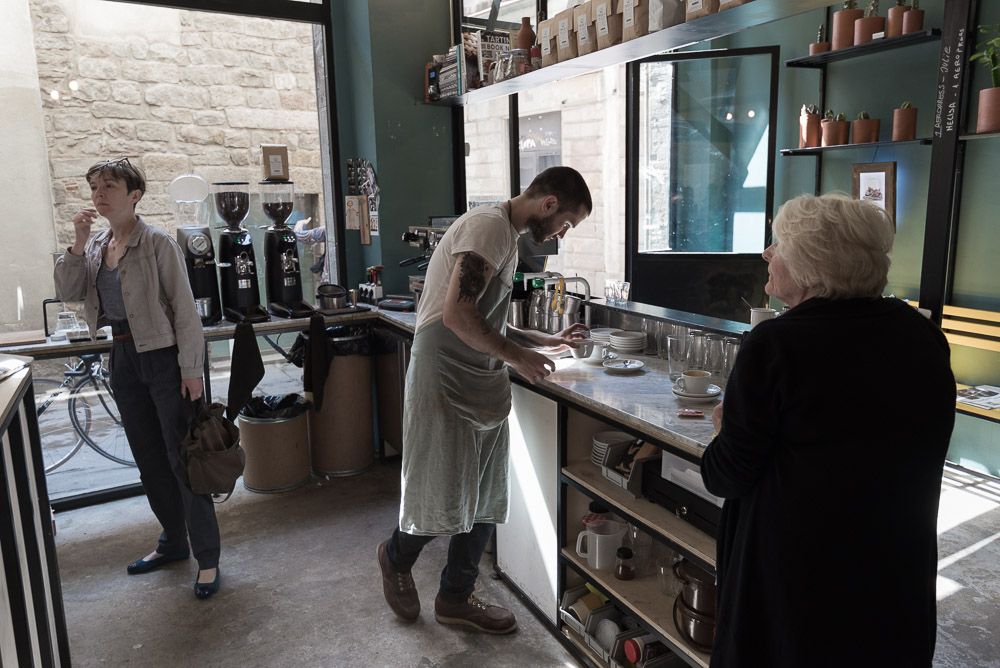 What have your learned?

Everything. I never stop learning. Unfortunately, I am not able to travel as much as I’d like to and I don’t have that much time to read. When I get home all I want to do is to sleep. I don’t have a computer, so the only way to get new information is through my clients. Everyday I learn a something new. Today I learned about bagels. They left me astonished. Yesterday I learned that Gipsy Kings were French. I never stop learning.

Where do you like to hang out in the city?

I like to go to Pony to have a beer or two with J, who is the owner, or with Eva, who is her sister, and then just go home. It is my favorite place in town since normally there’s no one who knows me. Many times I seek loneliness. J does everything by himself and always with love. It is a solid machine of service, a role model to follow and an example of good hospitality on a small scale in Barcelona. I have a secret map of places in my head that work only with one person. These kinds of places relax me.

Please tell us about a food entrepreneur that inspires you.

I love Miquel Ángel Vaquer’s initiatives. He is great at developing gastronomic concepts. His projects are always related with the food rituals and celebrations. For him quality is a result from all of that. That’s why his vermut parties, his banderillas and everything he is creating is a great part of the Spanish gastronomy. 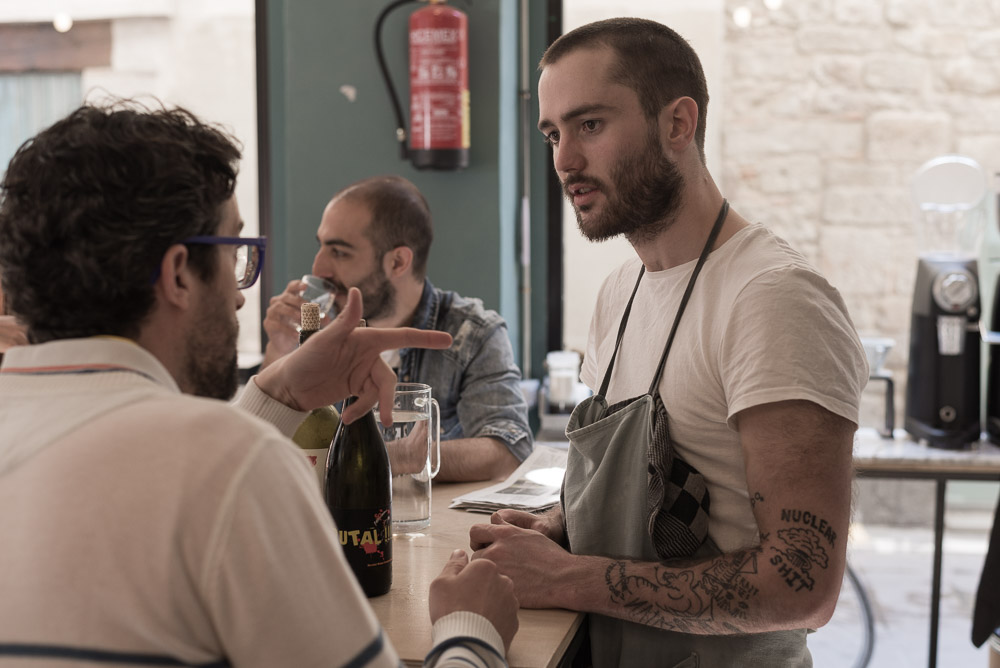 What are the upcoming plans for Satan’s?

We’ll be in a hotel that will open soon. We are very excited. At the same time, we are going to open a Satan’s in Copenhagen with Mads, a very good Danish friend who will be my partner there. I want to do it because he is a friend I have a special affection for him. He does everything great. Besides, he plays drums and likes metal. These are my future plans. I want to create more projects and also different ones. 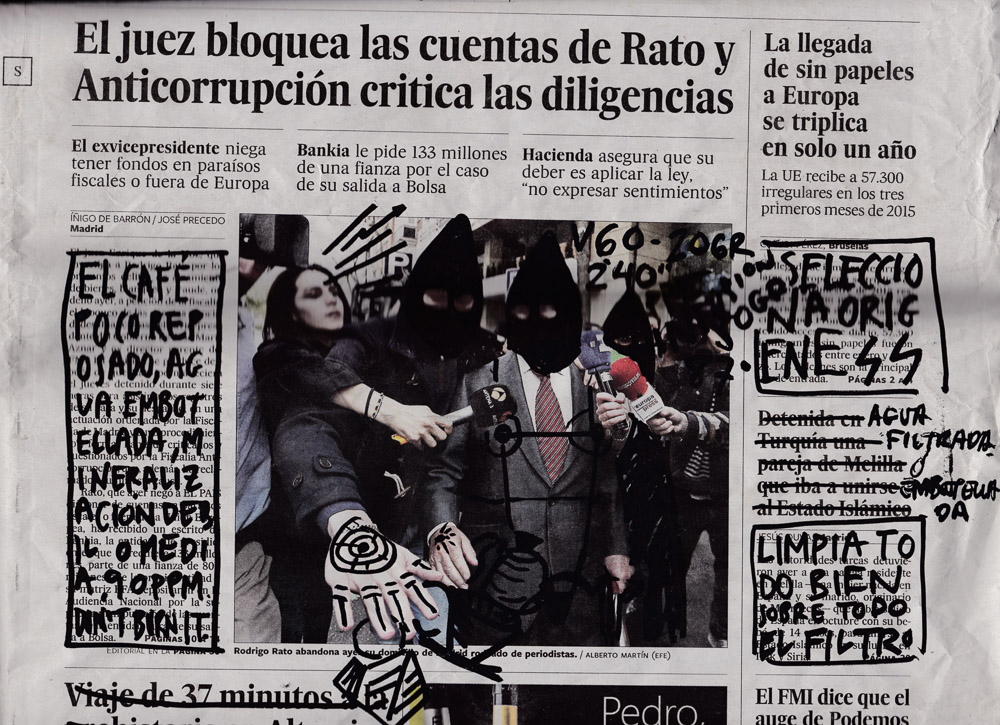